With its zero-ozone depletion potential (ODP) and very low global warming potential (GWP), R290 is considered the definitive solution to environmental damage and positioned as the alternative for the next generation of refrigerants for room air conditioners. However, its use is hindered by its flammability and the resulting concerns on safety. The safety demonstration named “Safety Demonstration with Source of Ignition and Leak Simulation Test”, held by the RAC NAMA project and the College of Industrial Technology, King Mongkut’s University of Technology North Bangkok (KMUTNB) , took place on 29 – 31 January 2020 and was designed to help producers understand the implications of using R290 in AC systems and prove that the application of R290 is safe if applicable safety standards (for ACs: IEC 60335-2-40) are met, and installation and servicing are conducted by trained technicians.

“The results of the safety test are useful for Thai producers because they now know what they need to focus on during the design and production of the R290 units. For consumers, the test should ease their concerns over safety because it proved that there is an absolutely low flammability risk as long as the products conform to the standards,” said Prof. Sorntouch Khumdumrongkiat of the Refrigeration and Air Conditioning Engineering Technology (RAET), College of Industrial Technology, King Mongkut’s University of Technology North Bangkok (KMUTNB), who supervised the test process.

R290 (propane) is classified as a “highly flammable” refrigerant (A3 classification). According to international safety standards, certain safety measures must be incorporated into the design of refrigeration and air conditioning (RAC) equipment to reduce the possibility of ignition. The flammability risk of a refrigerant arises whenever there is an occurrence of ignition sources to ignite a flammable concentration.

The “Safety Demonstration with Source of Ignition and Leak Simulation Test” that took place on 29 – 31 January 2020 at the College of Industrial Technology, KMUTNB, sought to enhance understanding of the implications of using R290 in AC systems in Thailand. Several leak simulation tests with different stakeholder groups (testing laboratory, AC and refrigeration producers, and policymakers) were conducted to provide realistic leak scenarios and determine the range of leak mass flow concentration from R290 units that can be used without any significant fire hazard. The event was organised by RAC NAMA Project together with KMUTNB. Participating in the event included RAC equipment producers, Electrical and Electronics Institute (EEI), and related agencies, namely Office of Natural Resources and Environmental Policy and Planning (ONEP), Department of Industrial Works (DIW), Department of Alternative Energy Development and Efficiency (DEDE), Department of Public Works and Town & Country Planning (DPT), Department of Skill Development (DSD), Office of the Vocational Education Commission (OVEC) and Thai Industrial Standards Institute (TISI).

The findings showed that A3 refrigerants such as R290 can be applied safely if the product is designed with the right components and to the applicable standards, and if installation and servicing is conducted by trained technicians who adhere to the requirements and the standards. 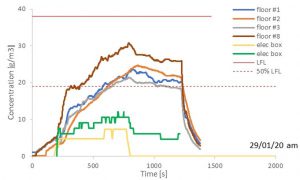 Figure 1: The Source of Ignition and Leak Simulation Test (SOILST) was organised for AC producers, laboratory and standards agencies to determine potential hazardous (flammable) zones in and on the equipment that might occur at potential ignition sources. The result showed that concentrations at all potential SOI remained well below the Lower Flammability Limit (LFL), which is the minimum concentration capable of producing a flash of fire in the presence of an ignition source. It can therefore be concluded that there is no flammability risk in the room in case of a refrigerant leak and the occurrence of an ignition source.

Flammable refrigerants are nothing new in Thailand
R290 is not the first flammable refrigerant that Thailand has used. Take Liquefied Petroleum Gas (LPG), which consists of Propane and Butane, as an example. It took some time for LPG to be used for domestic applications such as the cooking fuel in homes with which we are familiar today. Since then, with appropriate safety features incorporated in the gas as well as in the storage and pipeline systems , this fuel has served as an alternative to coal, kerosene and wood. In view of this, it can be said that R290 safety standards are needed.

“Most new household and commercial refrigerators nowadays use R600a which is also a propane just like R290. Even though R290 has higher flammability and the charge size for ACs is higher than refrigerators, it is still safe for application. The crucial part is during the design and production stages because that is when we try to reduce the risks to an absolute minimum so that the chance of ignition is nearly zero.”, said Prof. Sorntouch, one of the experts who ran the tests.

In addition to safety standards, it is important that only trained technicians install and maintain units containing hydrocarbon refrigerants.

“We should also not forget about the technicians who play an important role in installing and maintaining the units. With R290 ACs, there are new parts and processes, so the technicians need to be trained in the new knowledge, techniques and safety protocols. With all of these measures in place, consumers do not need to worry at all.”, said Prof. Sorntouch, a member of the team of KMUTNB professors who launched the first training on the “Safe Use and Handling of Flammable Natural Refrigerants in air conditioners” in the country.

Figure 2: The Room Leak Simulation Test (RoomLST) was held for producers of commercial refrigerators and public sector officials in order to assess the concentration of flammable refrigerant arising after rapid leakage into the room. The graphs illustrate that the concentrations of the leaked refrigerant in the air with the fan turned on (left) and with the fan turned off (right) at all positions remained below 50% of the LFL for the whole leak period. Therefore, it can be concluded that the leak concentrations are not enough to cause a fire hazard in case of an ignition source.

In this regard, the Thai Industrial Standard Institute (TISI) is currently updating the Thai Industrial Standard, TIS which is based on the international standard IEC 60335-2-40 (covering safety for domestic AC using flammable refrigerants). Once the national standard is updated, restrictions will be imposed on producers and technicians to comply with the new regulation. In turn, the safety framework in Thailand will be strengthened.

“To move this matter forward, the government should review the building code to be in line with the global refrigerant trend and encourage consumers to buy cooling appliances that use natural refrigerants because they consume less energy and are much more environmentally friendly. This can be done by launching some tax subsidy campaigns so that the price of the new products will be competitive and affordable for the public.”, he concluded.

The RAC NAMA Project promotes climate-friendly and energy-efficient cooling technologies. It is commissioned by the NAMA Facility on behalf of the German Ministry for the Environment, Nature Conservation and Nuclear Safety (BMU) and the UK’s Department for Business, Energy and Industrial Strategy. GIZ is commissioned to implement the project in partnership with the Office of Natural Resources and Environmental Policy and Planning (ONEP), the Department of Alternative Energy Development and Efficiency (DEDE) and the Electricity Generating Authority of Thailand (EGAT) to provide technical, policy and financial assistance through giving advice on policies and standards as well as training service technicians in the green technology. The project runs until March 2021.