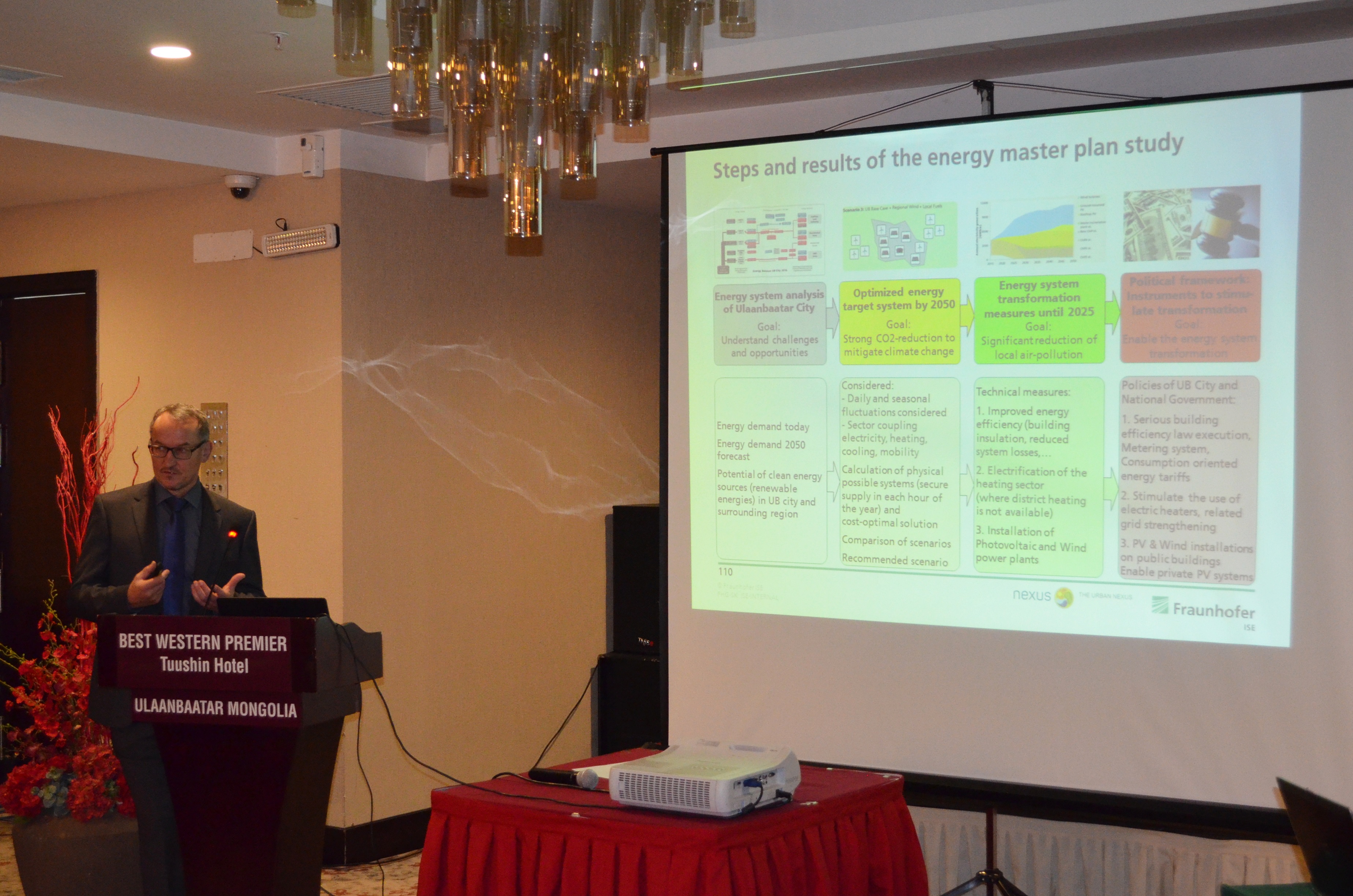 A workshop to present the Final Report on the “Energy Master Plan for Ulaanbaatar City” was organised on 16 October 2018 in Mongolia. More than 60 people from the Ulaanbaatar City (UB) Government, relevant national and local energy sector institutions, engineering infrastructure utilities, international organisations, the banking sector and the private sector attended the workshop.

In his opening speech, Mr. T. Gantumur, General Manager of UB City said: “This study is not only about the future energy supply system; it also reflects the challenges in terms of global climate change and heavy air pollution in UB City.”

Furthermore, to prevent 1.5 degrees Celsius of warming, the report said, greenhouse pollution must be reduced by 45% from 2010 levels by 2030, and 100% by 2050. It also found that, by 2050, use of coal as an electricity source would have to drop from nearly 40% today to between 1% and 7%. Renewable energy such as wind and solar, which make up about 20% of the electricity mix today, would have to increase to as much as 67%. These figures almost meet the targets set in the “Energy Master Plan for Ulaanbaatar City” study and the long-term transformation of the current energy system will be a very challenging but unavoidable step.

Dr. Christian Glass, First Secretary at the German Embassy said: “The German Government has been supporting Mongolia for many years in the field of energy efficiency and this study has to be seen as a logical continuation of this support.” He further noted that UB City faces many challenges in combating air pollution and in the transformation of the current energy system as it relies mostly on fossil fuel for energy supply. Others include cheap coal prices, the low income of the population, insufficient technical know-how and the high percentage of informal housing structures. “The conclusion and recommendations of this study will encourage UB City Government to assume its share of the responsibility to determine the city’s energy system and the energy sources. They are to be used to initiate the transformation from a coal-based to a mainly renewable energy-based energy system and by so doing effectively tackle the existing challenges of air-pollution and long-term climate change,” Dr. Glass added.

UB City is a key player in implementing national policy. Mongolia has committed itself to tackle climate change and ratified the Paris Agreement in 2016. With the Sustainable Development Vision 2030 and the Nationally Determined Contributions (NDCs), Mongolia has set clear goals for the steps until 2030 as its contribution to the international goal to decarbonise the energy sector and mitigate climate change by limiting the temperature increase globally to well below 2 °C by 2050. Another challenge faced by UB City is the severe air pollution. This means that UB City has to reduce air pollution mainly caused by burning coal and reduce CO2 emissions almost entirely by 2050.

Based on the analysis of today’s energy system, a forecast of the energy demand of UB in 2050 has been developed in the study, taking into account the growth of population and economy as well as the efficiency improvements, especially by insulating buildings. The renewable energy potentials of UB City and the wind potential of the surrounding region have been evaluated. Based on this input data, three scenarios with different assumptions on available resources have been developed and with the modelling tool KomMod, the cost-optimal energy systems have been calculated. The general findings from the modelling work are that photovoltaic and wind will be the main energy sources for UB City. However, since the wind potential within the city area is limited, the wind potential of the area around UB City should be used as well. Based on these findings, scenario 3 has been recommended as the target energy system for UB City in 2050 consisting of Photovoltaic/PV providing 38% of the electricity demand and wind turbines providing 37%. The Combined Heat and Power (CHP) plants (coal and waste incineration) will provide 22% and 3% of the electricity demand will be imported. The highly efficient coal-fired CHP plant would be used as a seasonally stored energy source.

To achieve the recommended target energy system, a systematic long-term transformation is necessary. Measures to be implemented in all sectors in parallel include reduction of heat losses through improved building insulation, improvements in energy system efficiency, installation of electric heating equipment and strengthening of the electrical grid, building up solar and wind capacities, and transformation of the mobility sector.

This study is not a final energy master plan for UB City, since the detailed evaluation of the possible measures and an alignment with local and national policies are needed before starting extensive implementation of the master plan.

We know that the energy policy is primarily a national policy responsibility, but due to the challenges UB is facing, there are good reasons for it to take over its part of the responsibility and to strengthen its local energy policy within the framework of the national energy policy. Also, the Paris Agreement underlines the importance of cities in contributing to national climate policies. It is expected that this study will contribute to the development of a systematic, strong and efficient energy policy for UB City, one that allows for the effective tackling of existing challenges in the short-term (air-pollution) as well as for the long-term (climate change).

The “Energy Master Plan for Ulaanbaatar City” study has been conducted in the framework of the GIZ “Integrated Resource Management in Asian Cities: Urban Nexus” project financed by the German Federal Ministry of Economic Cooperation and Development (BMZ) and implemented jointly with Ulaanbaatar City. The study was carried out by Fraunhofer Institute for Solar Energy Systems/ISE in Freiburg/Germany.