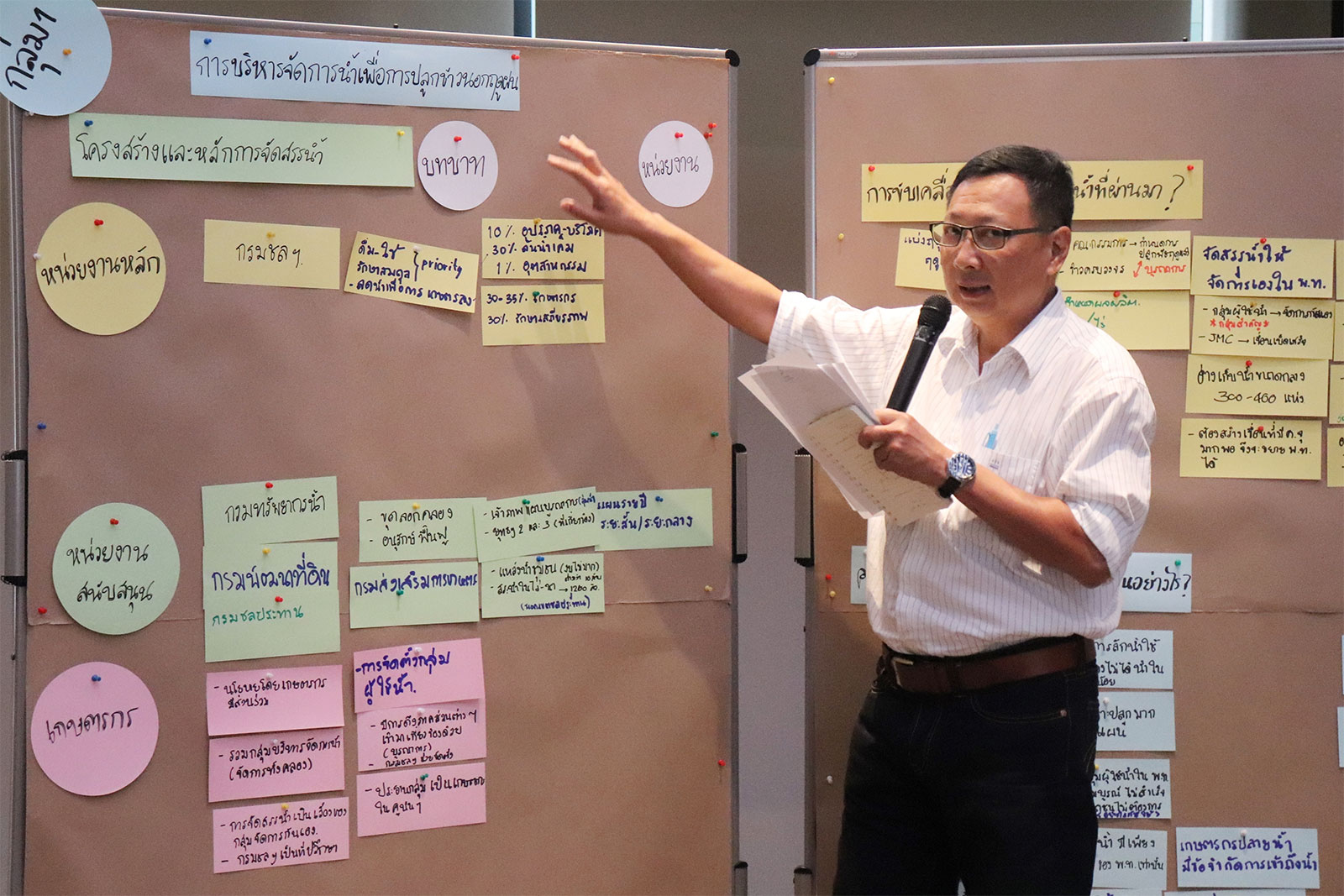 Thai government agencies and academics in the broad field of agriculture attended the workshop organised by the Office of Natural Resources and Environmental Policy and Planning (ONEP) and GIZ on 21 March 2018.

Dr. Kollawat Sakhakara, Environmentalist, Professional Level of CCMC highlighted the interconnectedness of climate change adaptation at the national and sub-national levels and the need for aligning sectoral efforts in national adaptation planning in Thailand. Dr. Panomsak Promburom, Agricultural Research Officer of the Multiple Cropping Centre at Chiang Mai University then spoke about rice production systems and the changing climate and gave a non-climatic risk profile of the Chaopraya river basin.

“I fully agree with how Dr. Panomsak divided the pilot area into four sub-areas; very low land, low land, irrigated upland, and rain-fed upland, since this reflects the reality. The rice production system, even within Chaopraya river basin, is not homogeneous. Looking into the sub-areas will help us understand the different risks that these are facing,” said Dr. Boondit Varinruk, Rice Production Technology Expert of the Rice Department.

The Chaopraya, one of the three most important rice production systems in Thailand, is faced such threats as flooding and droughts, which are projected to become more severe in the future. Non-climatic risks including rice prices, changes in market demand, pest and disease outbreaks and reliance on external factors like labour, water and seeds also come into play.

In order to decrease the impacts of the different risks on the farmers, Dr. Panomsak called for a holistic systems-approach based on agro-ecozones, noting that if the system and the individual farmers are to cope with a changing risk landscape, the status quo cannot be maintained.

In a detailed technical discussion, the importance of taking into account historic changes in the production system was mentioned as the most important factor putting the system at higher or lower risk. Some participants suggested better managing water resources for irrigation, especially given the rising demands from several sectors, as well as placing the farmers at the centre of policy-making considerations.

More detailed data are still required to assess the suitability of areas for mixed crop production and adjustments. They are needed in the context of market and policy mechanisms to keep up with farmers’ individual adaptation actions. Care should be taken not to limit their ability to generate higher returns, for example by promoting more than one variety of rice.

The agricultural policy and market group meanwhile gave their insights into the socio-economic factors, such as market price, cost of labour, government subsidies and intervention that are positively and negatively influencing the rice production system in the Chaopraya river basin, the community and at the individual farmer level.

What is a holistic systems-approach based on agro-ecozones?