Thai experts and representatives of authorities meet to hear and discuss the outcome of COP23webadminMarch 7, 2018March 11, 2019
More news 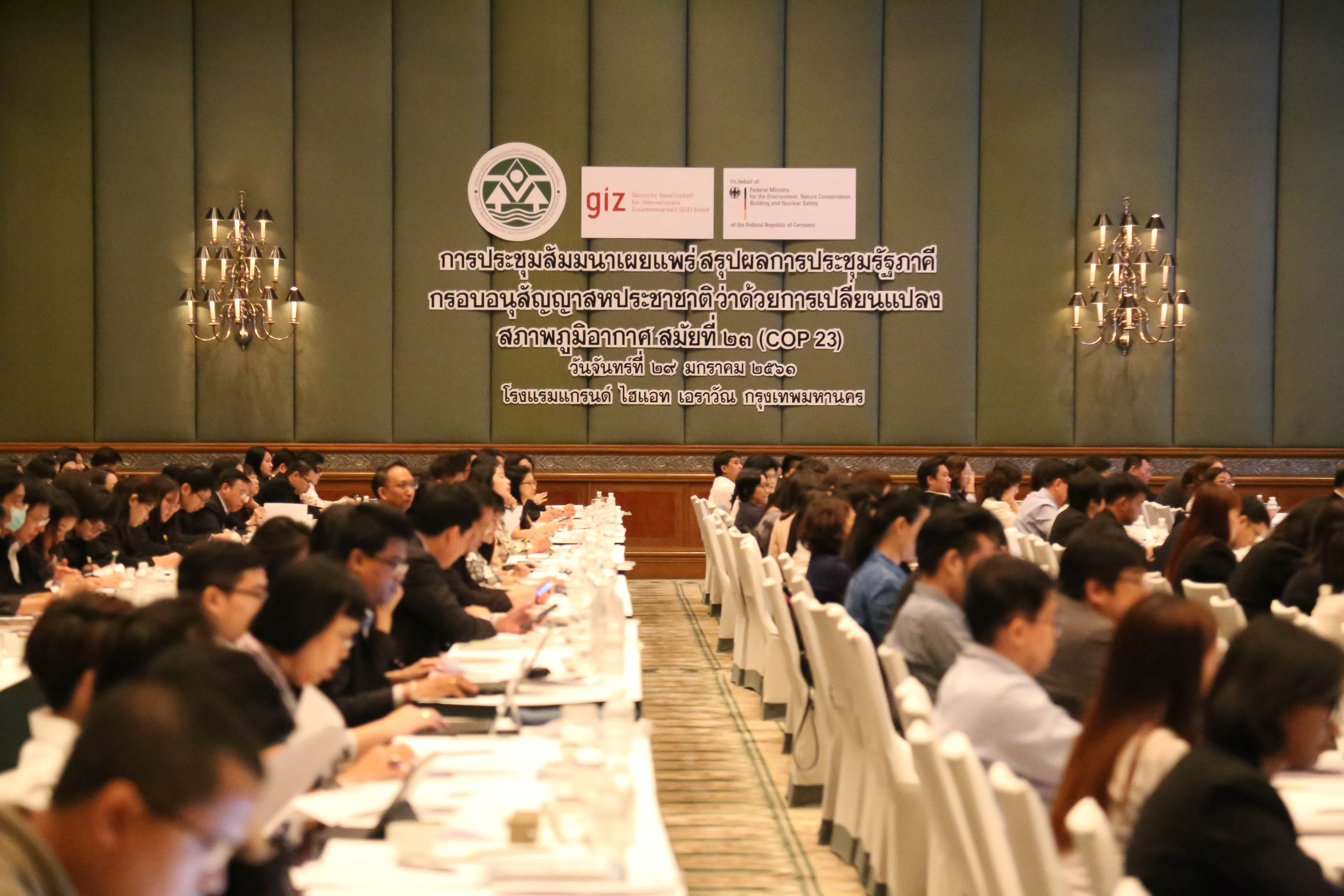 While the global community is preoccupied with climate change, governments of most countries are compelled to establish the policies and strategies for their own determined contributions.  Following the COP21 in 2016, countries adopted the Paris Agreement and Thailand ratified the Agreement on 21 September 2017. Thai representatives also attended the recent COP23 which was held on 6-18 November 2017 in Bonn, Germany.

As a follow-up to the COP23 meeting in Germany, experts and representatives from Thai government agencies, academic, civil societies and the private sector were invited on 29 January 2018 to hear and discuss the outcome of the United Nations Framework Convention on Climate Change Conference of the Parties (UNFCCC COP 23) in Bangkok. The meeting was held by Thailand’s Office of Natural Resources and Environmental Policy & Planning (ONEP) and Thai – German Climate Programme: Climate Policy. It also addressed the impact of the withdrawal of the United States from the Paris Agreement.

Mr. Anuson Chinvanno, Deputy Secretary-General to the Prime Minister for Political Affairs and Senior Expert of the National Committee on Climate Change Policy (NCCC), summarised the global trend in climate change negotiations and its implementation and the impact of the withdrawal of the U.S. from Paris Agreement on Thailand. He stated, “Thailand would be impacted by indirect effects such as the lack of support on climate finance. The goal of fundraising is not as yet achieved. Small countries including Thailand require this funding to implement greenhouse gas (GHG) reduction and climate action could be affected. The private sector could also be concerned by the impacts of GHG emission benchmarks on imported goods. Should the cooperation on climate action from every nation not be achieved, Thailand could be affected by the rise in sea levels.”

In the following session, Dr. Angkana Chalermpong, Director of UNFCCC Focal Point Section of ONEP, explained the details of the COP23 outcome. The key achievements include

• Through 2018 Talanoa Dialogue or Facilitative Dialogue multi-stakeholder partnerships will be strengthened. This will enable the parties to work to limit global temperature rise to well below 2 degrees Celsius.

• The progress on the Paris Agreement Implementation Guidelines (PAIG) in particular Adaptation Communication, Transparency Framework and International Market Mechanisms are expected to be finalised by COP24.

• The financial decisions for the Adaptation Fund were taken. The fund has been a mechanism under the Paris Agreement which provides supports to developing countries on adaptation projects.

• Parties agreed to further discussion on agriculture issues towards mechanism of action.

• Parties agreed to accelerate the fundraising to achieve 100,000 million US dollars by 2020.

A panel discussion conducted with representatives various sectors involved in the implementation under the Paris Agreement followed.

COP23 is the first conference that was presided over by a Small Island Development State presidency of Fiji, which is highly affected by climate change. It was also the first conference after the United States announced its withdrawal from the Paris Agreement, which leads to the question of whether climate change can be tackled at the global level.  Currently, 174 countries have ratified the Paris Agreement.

Although the Agreement has entered into force, there are still negotiations between the parties on the details of how to implement the Agreement such as on the topic of Nationally Determined Contributions (NDCs). While each country has different goals and the year for their goal, different types of greenhouse gas reduction, talks on the benchmarking are necessary.